'JCVD' is a movie that should not exist, seeing Van Damme reveal a human side spilling guts of introspection onto celluloid is truly bizaro world stuff. One of my favorite movies of the year, 'JCVD' is a fictional story staring Jean-Claude Van Damme as himself. The movie opens with one of the best opening title sequences I have seen all year. A fit but tired and weak 47-year-old Van Damme doing the best he can in an action sequence for his latest movie. This isn't your father's Jean-Claude Van Damme. Our hero had seen better days, he is in a nasty custody battle for his kids, his agent is worthless, he's broke, and he can't pay his lawyer. Planning to pay his lawyer the money he owes, Van Damme goes to the nearest bank only to end up getting tangled up in a back hold up. He is now a hostage, but the police and his fans believe that the Muscles from Brussels is one of the bank robbers. Inside the bank, the situation seems like something you only see in the movies, but Van Damme doesn’t have the movie magic to save the day.

The story has a non-liner fashion to it where timelines and fractured and scenes are repeated from other characters perspectives. The film has this really cool washed out look to it. Not to spoil anything, but action lovers may not agree with the final showdown. To call 'JCVD' an anti-action movie may be too easy. Before the final showdown, the movie breaks the fourth wall (Van Damme talks to the audience) and Jean-Claude tells us he is at a breaking point in his life. What happens next, you'll have to find out yourself, but being a hero or killing the bad guy may not always mean saving the day. 'JCVD' gets a B+. Enjoy!!! ~Caleb
Posted by Caleb Cox at 8:51 PM 1 comment:

Let the Right One In

Being a kid can sometimes be rough. It can especially be rough if you are a 12-year boy who has an awkward time dealing with bullies at school. Meet Oskar, a melancholy young man whom while waiting for the undivided attention from his estranged parents, spends his time play-acting. Oskar seems to be fascinated with violence. He cuts out news reports of recent crimes and deaths. Outside of his apartment he makes believes getting revenge on the bully’s who torment him at school. One night while playing outside, he meets his new next-door neighbor Eli (pronounced Ell-ie). The two quickly bond over a Rubik's Cube. Something is mysterious about Eli, she doesn’t go to school, her age is 'something' like 12, she smells funny, and the bitter winter cold does not bother her at all. To make the relationship more complex, Eli is a vampire. Even though 'Let the Right One In' is 100% more of a vampire movie than 'Twilight', it's deep down a coming of age love story. Make no mistake; while the movie is about friendship and love, it's also a moody gruesome horror tale. It is also one of the greatest vampire movies to come along in awhile.

To help keep her secret safe, Eli has a father figure named Hakan helps her feed by collecting blood at night. This is one of the many dark humor elements in the movie. He is not very good at getting food for Eli. It is quite funny but quite twisted, poor guy. Frustrated by Hakan, Eli goes out one night to get something to eat herself. If you want something done right, you got to do it yourself. Eli proves to be just as sloppy herself; she gets spotted while sucking the blood of her victim.

Oskar and Eli both help each other out by dealing with bullies and trying to skip out of town before the townspeople catch a vampire. One of my favorite horror movies of the year 'Let the Right One In' gets an A-. Enjoy!!!
~Caleb
Posted by Caleb Cox at 8:13 PM 3 comments:

The Day The Earth Stood Still

I am not one of these movie geeks that cry in outrage whenever remakes are made. Remakes can be a good thing, key words 'can be'. Not only movies but also ideas are 'remade' all the time, hardly anything is original anymore. It's what you do with the existing material that counts. One of my favorite movies of all time’ John Carpenter's The Thing' was a remake. The result was a better movie, not just a newer looking one. Look at 'The Ten Commandments' and 'Ben Hur', both huge movies and both remakes improving on the ideas of the originals.

When I saw the trailer for the new 'The Day The Earth Stood Still' the thought of 'unnecessary' didn't cross my mind, it was more like 'boring'. The last movie I cared about CGI blowing stuff up was 'Independence Day'. A preview of trucks and football stadiums disintegrating before my eyes, I just don't find cool anymore. So what drove me to see the new TDTESS? Curiosity.
It wasn't till last night that I saw the original TDTESS, which if you did not know is a science fiction classic from 1951. An alien with a mighty robot lands their spacecraft on Cold War-era Earth just after the end of World War II. They bring an important message to the planet that Klaatu wishes to tell to representatives of all nations. However, communication turns out to be difficult, so, after learning something about the natives, Klaatu decides on an alternative approach. After seeing the movie, I can see why it is a classic. It was made during the atomic age; the whole movie is a message for peace and not nuclear war. Without doing any research, it was easy to see the huge influence it has had on other science fiction films. I did like the movie and think it holds up considering how old it is. I give the original a C+.

This afternoon I had the privilege to go see the new TDTESS. The new movie is much more darker and has a different message this time. Instead of peace, Klaatu sends us a message that Humans are destroying the earth because we haven't been 'green' enough. Too bad they didn’t pick a real problem with the world today. Is the new movie better than the original? I can't answer that; however, I will say it is very respectful of the original and makes ideas better. The robot GORT does not disappoint like some will think or say. The new GORT is bigger and has some new weapons to show off. His big scene at the end was a real let down, but for the most part I loved the new GORT just as much as the old classic GORT. In summery TDTESS is a great remake that sadly will never get the attention that it deserves. The better and not just newer TDTESS gets a C+! Enjoy!!!

~Caleb
Posted by Caleb Cox at 5:39 PM No comments:

Don't let the 165 min. runtime scare you; Australia is worth the time to see on the big screen. If you like classic movies then you should like what this film has to offer, old school silver screen entertainment. Set in northern Australia before World War II, an English aristocrat who inherits a sprawling ranch reluctantly pacts with a stockman in order to protect her new property from a takeover plot. As the pair drives 2,000 head of cattle over unforgiving landscape, they experience the bombing of Darwin, Australia, by Japanese forces firsthand.

From the same guy that brought us Moulin Rouge, Australia has stylized backgrounds, unique camera work, and talented actors. Nicole Kidman and Hugh Jackman make their characters real fun to watch. They really know what to bring to the table, they understand what kind of movie Australia is, epic. With this movie, the director Baz Luhrmann had made his Gone With The Wind.

With winter upon us, Australia may just be the perfect night out, out of the cold.

It's a C+ for Australia, enjoy!

This is my favorite heist movie of 2008! The awesome documentary Man on Wire is about tightrope walker Philippe Petit and how he with the help of friends sneaked into the World Trade Center in 1974 and performed a high wire act between the Twin Towers.

The film had me from the very start. The movie plays like a heist film including all the planning, suspense, and mistakes that may botch the entire operation. Brilliant moviemaking from director James Marsh. Marsh lets us get to know Philippe really well, so by the time you see this daredevil on the wire, you feel that you know him and understand his passion.

Man on Wire is a great movie that is now playing at the Moxie. www.moxiecinema.com

Man, was this movie cool! What a great love letter to one of my favorite film genres, the good ole Spaghetti Western. What is a Spaghetti Western you ask? The simplest answer to that question could be the movie The Good, the Bad, and the Ugly. Are you still confused?

Spaghetti Western, also known in some countries in mainland Europe as the Italo-Western, is a nickname for a broad sub-genre of Western film that emerged in the mid-1960s, so named because most were produced by Italian studios, usually in co production with a Spanish partner.

The typical team was made up of an Italian director, Spanish technical staff and a cast of Italian and Spanish actors, sometimes a falling Hollywood star and sometimes a rising one like the young Clint Eastwood in many of Sergio Leone's films. The films were primarily shot in the Andalusia region of Spain, and in particular the Tabernas Desert of Almería, because it resembles the American Southwest. (A few were shot on Sardinia.) Because of the desert setting and the readily available southern Spanish extras, a usual theme in Spaghetti Westerns is the Mexican Revolution, Mexican bandits, and the border region shared by Mexico and the U.S.

The best-known and perhaps archetypal Spaghetti Westerns were the Man With No Name trilogy (or the Dollars Trilogy) directed by Sergio Leone, starring then-TV actor Clint Eastwood and with musical scores composed by Ennio Morricone (all of whom are now synonymous with the genre): A Fistful of Dollars (1964), For a Few Dollars More (1965), and The Good, the Bad and the Ugly (1966). Atypically for the genre, the last had a relatively high budget, over one million $USD. Leone's next film after the so-called "trilogy" was Once Upon a Time in the West, which is often lumped in with the previous three for its similar style and accompanying score by Morricone, although it differs by the absence of Clint Eastwood in the starring role.

Thanks Wiki for that wonderful insight.

Now, Sukiyaki Western Django is not for everybody, the film will be an acquired taste. It has moments of mainstream appeal, but it's just not that kind of movie.
If the plot of Sukiyaki Western Django sounds familiar to you, that's because the movie takes a lot of cues from other Spaghetti Western classics such as Yojimbo(really a samurai film) and Django. A gunslinger crosses paths with two rival gangs who are both on the hunt for hidden gold in a remote western town. Knowing his services are valuable to either side, he offers himself to the gang that will offer up the biggest share of the wealth. This is a story that's been done to death, but what makes me like it, is the way the story is told.

Style is what this movie has. The whole production is done well with everything from beautiful camera work, surreal set design, cool costumes, and a very awesome chain gun in a coffin. Sukiyaki Western Django true eye candy and a really great tribute to some of the greatest Spaghetti Westerns of all time!

Sukiyaki Western Django gets an A+! Enjoy!!

~Caleb
Posted by Caleb Cox at 5:07 PM No comments: 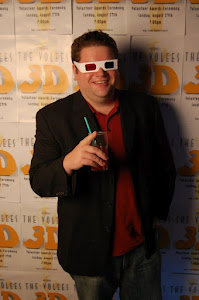